“To Honor the Past…and Inspire the Future.”

The Montabella All-State Wall was developed by former Athletic Director, John Helinski, back in 2013.  He sought out what other schools in the surrounding area might do for honoring All-State athletes.  In conjunction with a very dedicated All-State Wall Committee, Mr. Helinski received the help of some local businesses and our very own Industrial Arts Teacher, Max Simon to help build what we all know as the “All-State Wall.”

The All-State Wall Committee was made up of Jann LaPointe, Ivan Renne, Dave Clay, Jeff Kauffman, Parker Eldred, Don Havlicek, Bette Helmer, Todd Brooks, Gloria Smith, and Kevin Smith.  The committee searched their histories, the internet, spoke with community members, and remembered past All-State athletes to come up with since graduated All-State Athletes.

It was noted in an All-State Wall Program that a special thanks went out to Montabella Sports Boosters, ALRO Steel, Trophy Shoppe (now E&S Graphics), Max Simon, Suzi Dunn, Dave Forquer, Shaun Balhorn, and Luke Sawyer for their contributions to make the All-State Wall possible.

With all of that said, if you notice after looking at the members of the All-State Wall and you know of someone that earned All-State while at Montabella, please contact the school’s Athletic Director.

To be considered for the All-State Wall, the one of the following criteria must be met: 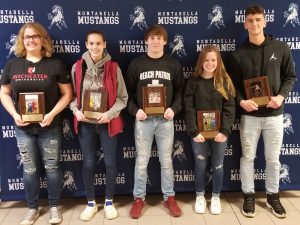 On December 19th, 2019 six former and current student-athletes were introduced as having earned All-State during the 2018-2019 season, as well as one from 1999.  Pictured left to right:  Laura Keilholtz (Discus), Helena Snyder (Cross Country), David Shattuck (Wrestling), Mya Scott (Pole Vault), and Connor Riley (Basketball).  Missing from picture was Christie (Johnson) Harris (Class of 1999).

No Events This Week

Events are added by athletic staff.
View All Events